Once upon a long time ago...actually nine months ago, I started what I thought would be a simple fun mystery quilt designed by Pat Sloan. 2017 was the year of social quilting for me, and I joined (too?) many quilt alongs.

When the quilt along started, all I knew was the name, Grandma's Kitchen. I made my first block with a picture of my Gramma Ann's kitchen, which fascinated me as a little girl because the cabinet doors were push-activated. 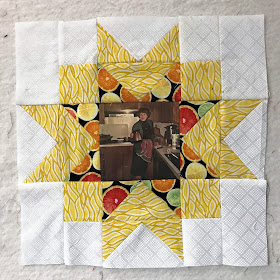 I shared the block on a text message with my mom and four aunts. They oohed and ahhed and shared their memories of Gramma Ann's kitchen. 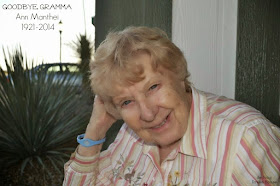 Gramma Ann passed away in 2014. She was an incredible woman who witnessed dramatic change in the world during her 93 years: WW2 bride, Avon lady, newspaper writer, game warden's wife, mom to five vivacious girls, lover of the outdoors, travel, fishing, golf, cards, Dr. Oz, Betty Boop, leopard print, babies, God, and "her pool." She spent most of her life in Minnesota and Arizona before her final years in Wisconsin. In her later years, she was almost always found with a crochet hook in hand, churning out scrubbies that she would give away as gifts and sell for a dollar at garage sales. 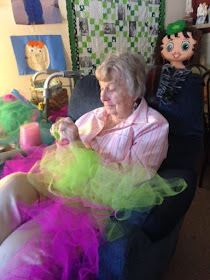 The last time I visited her in Arizona home, she tried teaching me to crochet and all I succeeded in making was a huge knot. My son was about to start school and I was looking for a hobby to fill my days. Crochet was not to be. I decided to try quilting because my son requested a Thomas the Train quilt. I made it on a $15 machine from Big Lots. The quilt was a mess but I was hooked. And promptly bought a new sewing machine 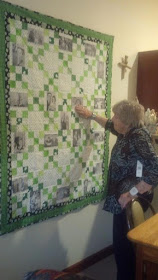 One of my first quilts was an Irish chain memory quilt for Gramma. I wanted her to see that I could be crafty, but more than that, I wanted her to have something to help her remember her amazing life and everyone she loved.  I was so honored that she asked to have it hung up on her wall to show everyone who visited, and I was really touched that at the end, it kept her warm while it showing the hospice staff that the frail woman they nurtured had lived a full life.

When Gramma passed, I was given a box of her clothes. I wanted to make a memory quilt for me with them, but the emotions of the project stunted my creativity. So I put the box on a shelf and waited for inspiration to hit. 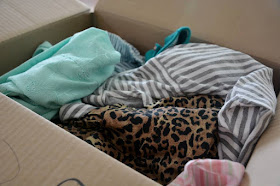 Three weeks into the quilt along, my family went to the Netherlands to visit my in-laws. We brought my mom and Aunt Lori. To tick a box on my Mom's bucket list, and to fulfill one of Gramma Ann's wishes, we took a five day trip to Ireland, the land of Gramma's family. 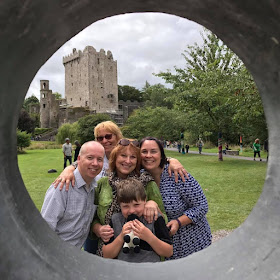 I wasn't able to sew for those weeks, but I printed off the block instructions and listened to my mom and aunt's ideas. I had decided to use expand Pat's theme to all the facets of Gramma's life. Mom and Lori joked about who should get the quilt, and by the time I returned home, I decided that I would make SIX quilts, one for me, and one for each of Gramma's daughters. 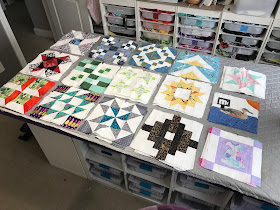 It took several weeks before I was caught up with making six of each of the blocks. The hardest part was not posting any photos. I was spending more time sewing that my Instagram feed would indicate, but I knew it would be worth it to surprise my aunts.

Mom and Lori were in one the surprise and helped build the discussion with the aunties on a text thread that continued each week as I shared each block. I also wrote up a post for each block for this blog, sharing pictures, telling stories, and writing about the fabric I used for each block, including several using her clothes.

Once Pat shared the layout of her design, I had already decided that I would switch things up so I could include Gramma's name and the years of her life on my quilts. 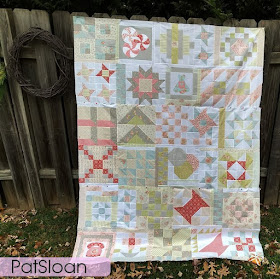 Around this same time, I realized that I was nearing my 100th quilt finish. I had several quilts in progress, so I made sure that my first Gramma Ann quilt would be my 100th. When I finished the top, I had Niels take pictures of me in front of it, wearing the duster I started wearing in her honor as I sewed. 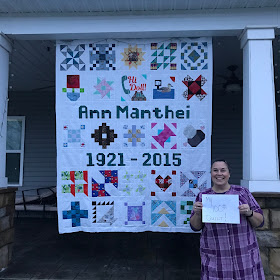 And then I remembered that Gramma actually died in 2014. Oops...What a relief that I hadn't quilted it yet...or finished piecing the other five quilts! 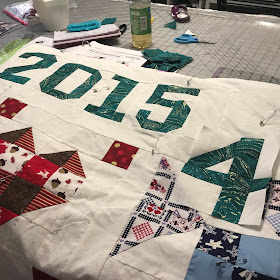 I should mention that the letters and numbers were used with patterns from Lori Holt's awesome book, Spelling Bee. I have Pat to thank for this, as well, as she promoted it on her page. I love text quilts and have already used the book for several projects. 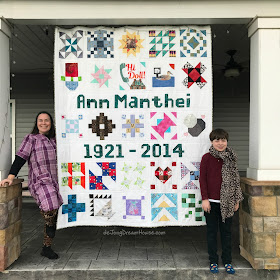 For the back of my quilt, I chose a print that reminded me of the scrubbies I tried to make with Gramma six years ago. 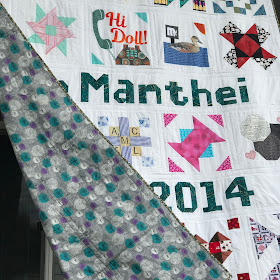 I shared my quilt with my mom and aunties. They admired it and talked about how much they enjoyed remembering Gramma with me as I worked on it. And then we moved on...or so they thought. I went back to work finishing the other five quilts. 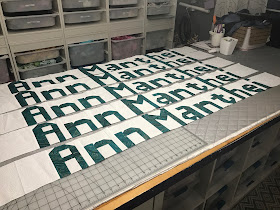 Once they were all done, we drove all over town looking for a place long enough and with a fence that would allow me to display all six quilts. 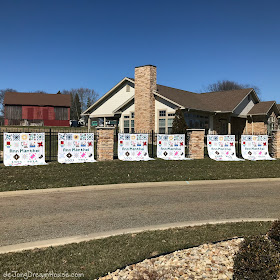 I chose backing for each sister that reflected their personality.

And then, before our family left on vacation, I mailed out the quilts. 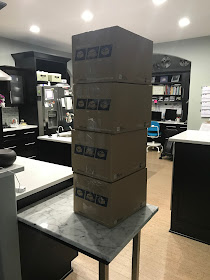 Even though she lives farthest away from me, the first quilt arrived to Auntie Ann, who is the firstborn, and Gramma's namesake. Mom texted her the day her box was due and led Ann to believe that she would be receiving something from her. Ann asked what it was, but Mom wouldn't tell her. While my uncle went to pick the box up, Mom called Ann and added me to the call so I could silently listen in. It was SO fun to hear Ann's surprise and delight and confusion about how she ended up with the quilt. Ann isn't on social media so it was really special to hear the emotion in her voice as she looked at each block. 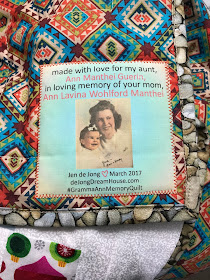 For the back of Ann's quilt, I chose a Southwest pattern I hoped would fit with her new home and collection of Southwestern art. For the label, I used the photo the Grampa Leo had with him during the war. 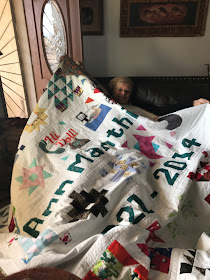 Images were shared and Mom, Lori, and I went with the story that Ann got the quilt because she was the namesake. But then, the next day, My aunt Terri, who is currently sharing her home with aunt Mary, received their box. It was so fun to see this text. 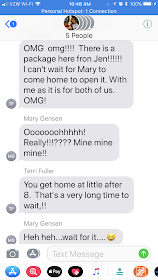 While Terri was waiting for Mary to get home from work, Mom received her box! For mom's backing, I used the Route 66 fabric I used on block #24 because it included the name of the city where both Gramma and Mom lived for so many years. For the label, I used my favorite photo of the two of them, taken on Mom's wedding day to my dad.

Finally, nearly 10pm my time, Mary and Terri opened their quilts. I'm hoping they send me a photo of them together, but in the meantime, I love that their photos show their different personalities so well 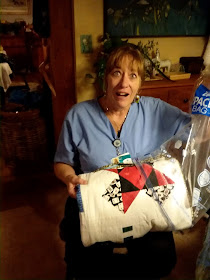 Mary is always on the move, whether hard at work or hard at play. For the back of her quilt, I used a print with the quote, "Not all who wander are lost." For the label, I used one of my favorite photos of all five sisters together. It was taken on Easter Sunday, in the mid60s. Fitting because her quilt arrived on Good Friday. (Mary is in the red coat). 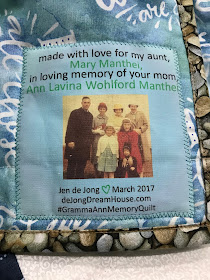 Terri, like me, is more sentimental. I love this picture of her with her quilt. 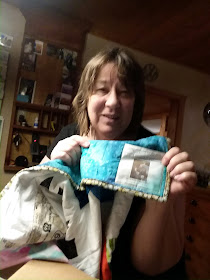 Terri is an artist, who paints beautiful watercolors. I chose her backing as a nod to her gift of color and art. For the label I used a photo I just love of her in Gramma's arms. 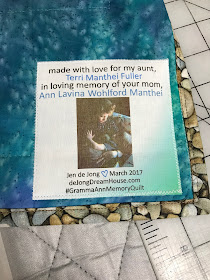 The final quilt was mailed to my aunt Lori, who was in on the secret all along. She was out of town when I mailed the others, so she asked me to wait until we were back from vacation to send hers. 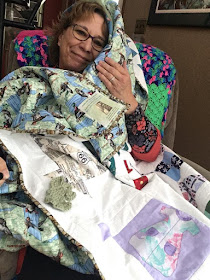 For the back of Lori's quilt, I used Minnesota fabric I bought the last time we were in Minnesota, on our way to Russian camp. We spent the night before camp at Lori's house, where I saw the picture I used on her label. 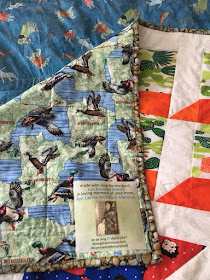 My friend Janice from Quilts of Compassion, gave me six crocheted angels that I was able to give with each quilt. Such a perfect final touch on a project that really started when Gramma tried to teach me to crochet five years ago. 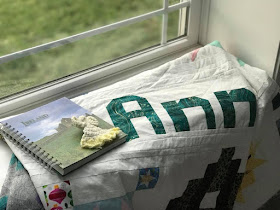 I hope that these six quilts will be well loved and well used. I like the idea of my Aunties taking Gramma with them to the cabin, or enjoying the outdoors,  and snuggled on the couch. I love the idea of my Aunties using the quilt to tell their grandchildren about the wonderful woman who was our matriarch. And I hope Gramma is proud of me for finding my craft.