It's the last day of the month, so I had to get my behind in gear to finish my goal this month. My brain injury has been giving me grief and I've had such a hard time getting going for the last few weeks. Oh, and I also did this. 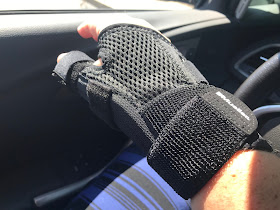 The crazy thing is, I'm not even sure how it happened. The doctor isn't even sure if it's tendonitis or a sprained thumb, but the treatment is the same. After having my left foot in a walking boot the last two summers, a brace for my thumb doesn't seem so bad,  but it does get in the way of my quilting!

Challenges aside, I'm happy to report that I did well this month with my one monthly goal. My goal was to start my Oops and Orphans quilt using some of my practice, sample, leftover, and not-quite-right blocks, as well as small scraps given to me by my quilting guild. 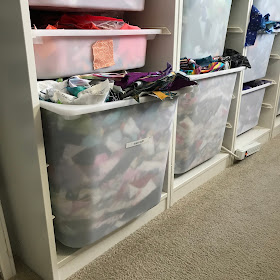 In addition to using up bins and bags of scraps, I wanted to push myself to practice free motion quilting. I used the Quilt as You Go so that I could use up batting scraps as well, and could start with smaller pieces. (I used 15.5" squares).

Making the scrappy blocks was rather fun. The bag I used was made up of 1.75" strips. I decided to sew them into long strips and used them to make each Oops block into 15.5"--easy peasy. 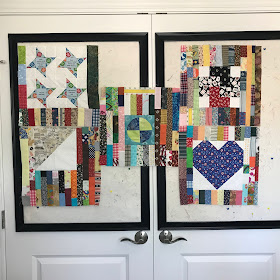 I cut the batting and backing 17.5" square and used basting spray rather than pins. So far, so good. 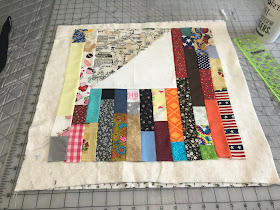 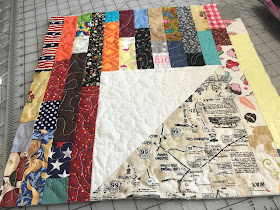 My second block was more of a geometric meander, though I had more curves than all right angles as I intended. 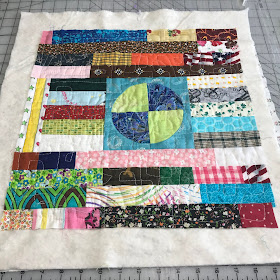 For my next two blocks I used the quilting ruler I picked up at a quilt show a few years ago.  The large waves got easier after the first few rows. 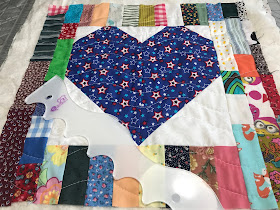 The small waves were a bit trickier, but I'm happy with my first attempt. 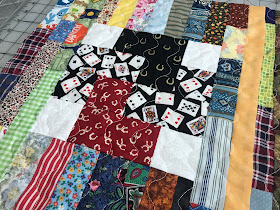 I started a fitth block, but my sewing machine was DONE with free motion and I could not get it to work again. (I found a Pfaff shop close my son's Dutch school. In the fall, I'm going to bring my machine up there while he's a school to make sure I'm setting everything up right and have someone who knows my machine looking over my shoulder). 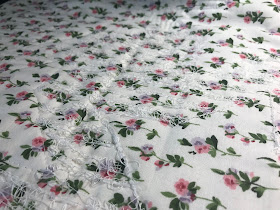 I ripped out all the wonky stitches and tried again (I was doing matchsticks so it was a lot!), but the thread kept breaking. (Same thread that worked beautifully for everything else). So I decided that four blocks was a good start for this goal

I intended to use Jera Brandvig's method as she describes in her book, Quilt As-You-Go. 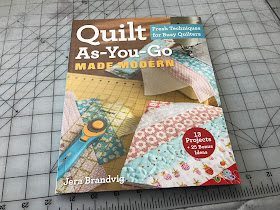 Unfortunately, I didn't read the book before starting my quilting. Her method has the quilting done with just the top and batting. Oops.

I found Jennie Doan's method on YouTube. I was able to modify her method to make my blocks work. I took two of my squared up blocks and placed them backing sides together. 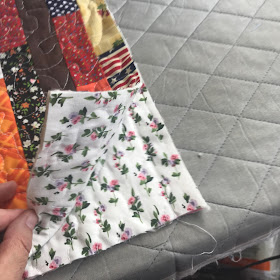 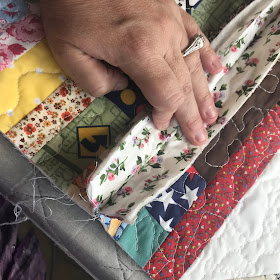 First I pressed the seam open. You can see that there is still some free motion quilting within the seam allowance. I may or may not rip that out at some point 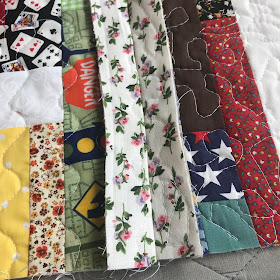 Then, I folded each side of the seam under itself to hide the raw edge. 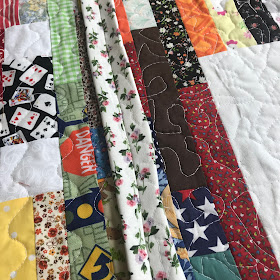 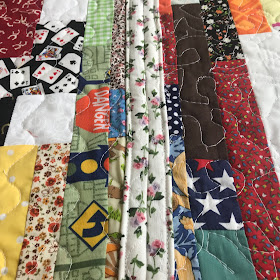 Since I had four decent blocks, I decided to add the other two blocks. This is why Jennie's method is better. I had to cut out the notches of batting on either side of my seams because it was too thick. Here's the first notch. 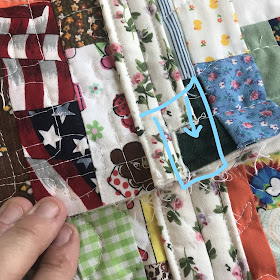 At this point, my quilt is approximately 30" x 30". I'm trying to decide what to do with these quilts.  Obviously, they aren't my best work, so I don't want to donate them to my normal places. I'm thinking I may use smaller blocks to make up kennel mats for our local animal shelter. I'm sure the dogs would love all the smells from some of these vintage prints and they won't care about my wonky free motion. I may make a couple more blocks this size thought to make a slightly larger quilt that I will keep as a reminder of my first attempts at free motion. 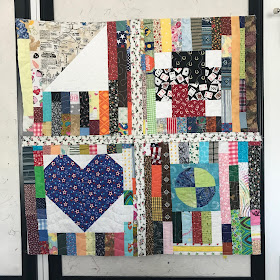 Now that I've dug in, free motion isn't so scary. I just need to make time to keep practicing. Fortunately, I have enough scraps to make about a hundred quilt as you go quilts!

Here's a recap of other One Monthly Goals I have made.

Another month, another goal. I have a stack of quilt tops to quilt, so you would think my goal would lie somewhere in there. 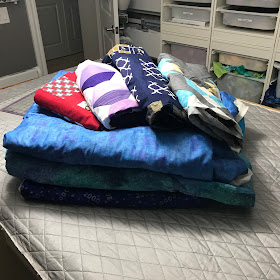 However, I'm going to do something different this month. I have three little goals that I can work into one project. I just need the push to get started. Thank you, Elm Street Quilts!

#1: I really want to learn to free motion. I have used straight line or spiral motion for most of the 107 (!) quilts I've made so far. I really like the look, but I want to expand my repertoire.

#2: I also want to learn Quilt as You Go. I have a TON of batting scraps (hello, 107 quilts!) and I can only make so many microwave cozies. I'm planning to use Quilt As-You-Go by Jera Brandvig.

#3: Speaking of scraps, I want to start an Oops quilt of all my practice blocks, extras, and not quite right for the project blocks I have overflowing in a bin.

So my goal for May is to start my Oops quilt using free motion and QAYG techniques. I will work on this as I'm also tackling that big stack of quilts from the top of the page, so I'm making a modest goal of 5 blocks this month. I think once I get started, I'll really like it. I just need to get over my fears and dig in!

Here's a recap of other One Monthly Goals I have made.