We're taking it easy this Christmas here at the de Jong Dream House. School is out for my son and Niels is home from work this week. I'm hoping to spend some time in my craft room, maybe getting caught up with posting a few projects we've done, but mostly, simply enjoying the company of my boys.

At the moment, my boys are reading together, so I have a few moments to post about my latest quilt, which was a gift for our son's preschool teacher to use in the classroom: a reversible I Spy/Checkers quilt.

Our son started a new school in October. It could have been difficult starting a second new school in six weeks, but D was welcomed with open arms. Before his first day, his new teacher made sure his name was included in all the class lists, job jars, birthday calendar, and throughout the room and she asked a few boys to be his welcoming committee. When I dropped him off that first day, I walked in with him, and everyone ran over to greet him. When I picked him up, he cried and didn't want to leave. He said, "Mommy! I have FRIENDS!"

Now, if you want to score brownie points with this mama, you love on my son. And D's teacher has done that so well. We love her and we love his new school.

I knew I wanted to sew something for his class but I wasn't sure what. I saw a checkers quilt and thought it would be a nice easy quilt to make. As I started planning it though, I though  checkers might be a little advanced for pre-k, so I decided to make the flip side an I Spy quilt. Now more kids can play with it!

I didn't really have a tutorial I followed, nor did I do a very good job writing down directions, but I did take quite a few pictures of the process. 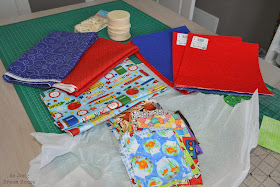 My supplies:
* 1 yard blue fabric
* 1 yard red fabric
* 2.5 yards school fabric (this was plenty for the quilt, plus drawstring bags for all the pieces)
* 4" I Spy squares. I bought 100 squares on eBay. The bundle included 2 each of 50 designs. I used about 40 of them, and swapped the others with squares of fabric I had in my scrap bins.
* 24 3" wood circles
* 1 bag of wood letters
* blue and red stickable felt sheets. I only needed two of each.

Basically, other than the yardage, I way overestimated what I needed, so I could make another quilt easily.

I started with the checkers side. I looked at a picture of checkerboard, and noted that it was an 8x8 square, so I cut out four 4" strips of blue fabric and four 4" strips of red fabric. My wood circles (future checker pieces) were 3" so I added an inch for seam allowance and a little wiggle room. 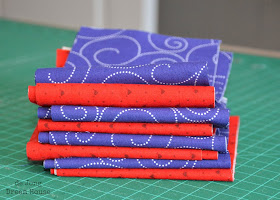 Next I sewed the eight strips together, alternating colors. 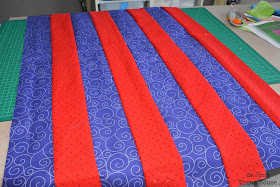 After ironing and squaring up, I cut eight 4" strips. 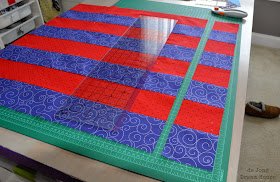 Then I sewed the eight strips together, making sure to alternate each side to make the checkerboard. 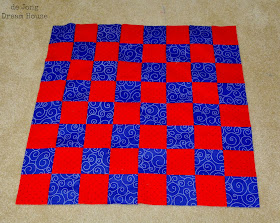 I wasn't sure yet how I wanted to do the border, so I started on the I Spy side. Originally, I thought I would lay out each square in advance, but I decided it would be easier to just be aware that there was a good contrast between each square as I started chain piecing two squares together. 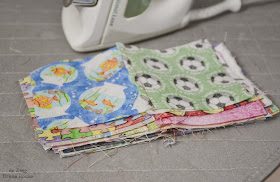 I only started quilting nine months ago, so I'm still learning a lot with each quilt. Chain piecing has changed my (quilting) world. 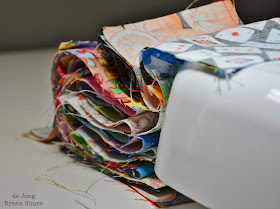 I did the same thing as I pieced the two-squares into four-squares. 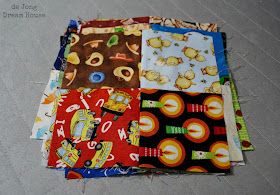 I continued along until all 64 squares were pieced together. 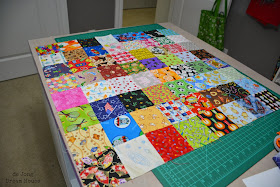 By this point, I decided to put a border around the checkerboard with the school print. I used 2.5" strips. 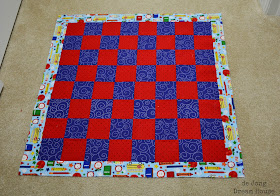 I cut out two 16.5" x 4" of each color and sewed one of each together for the two sides of the outside border. 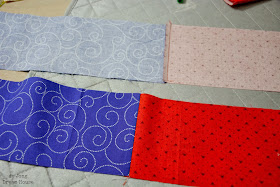 I lined up the divide with the middle of the checkerboard so that there would be a blue side and and red side. 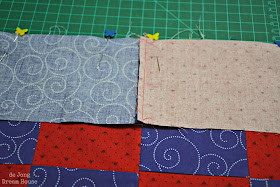 Then I repeated on the other side. 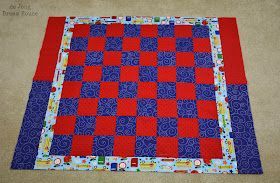 I finished with 4" strips on the top and bottom. 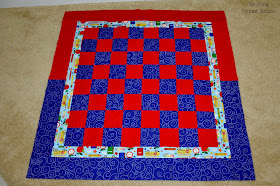 I followed the same idea on the I Spy side. My son's favorite color is blue so I opted for a 2.5" blue frame around the I spy quilt. 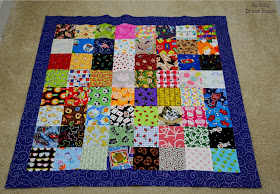 I made red 4" squares for the corners and used the school fabric for the rest of the outer borders. 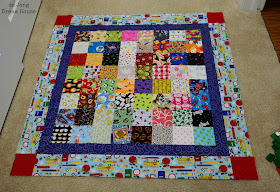 Two sides done and ready to quilt! (Don't mind the Legos. My little helper was getting pretty excited by this point and wanted to monitor my progress very closely!) 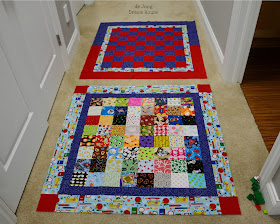 I used washed flannel for the batting. 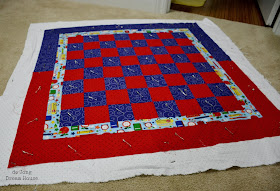 My walking foot gave me serious grief on this quilt for some reason. (Note to self: in 2014, you will learn how to free motion). After my sad little diagonals, I switched back to my regular foot and made big squares around the borders. I would have preferred to use one of the solid colors for the binding but I didn't quite have enough of either. (I had originally bought a yard of each of the three main fabrics, but when I went back for more, I could only find the school fabric). 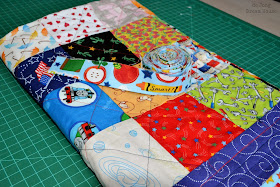 Santa came early and brought me these Clover Wonder Clips (<--Amazon affiliate link), which made binding so much easier. 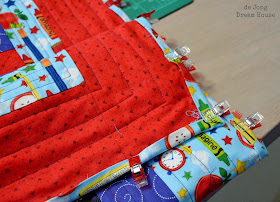 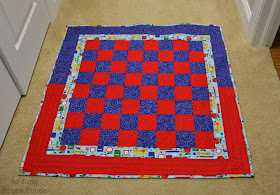 Once the quilt was done, it didn't take long to finish the accessories. For the checkers, I placed the wood circles on the sticky felt sheets. I used my new Fiskars stick rotary cutter (<--Amazon affiliate link) to cut felt circles. Photo credit for this step goes to my newly-five-year-old photographer. 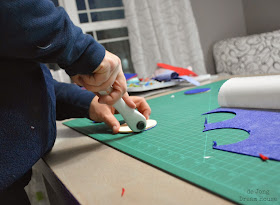 D was super excited to learn how to play checkers. He picked it up quickly and beat me in his first game. 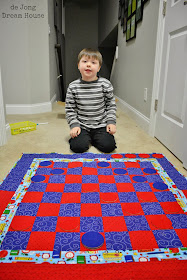 Next we role played playing I Spy with his friends from school. 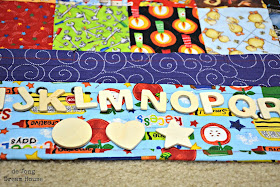 Our play time gave me the perfect background for the label. 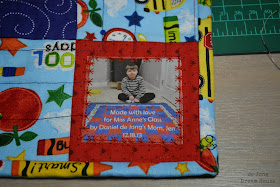 Finally, I made little draw string bags for each set of checkers, the letters, and big bag for everything. 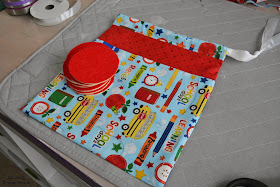 I think I used four different methods for each of the bags, so that tutorial will have to wait for another day. 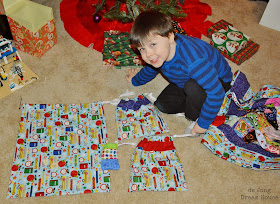 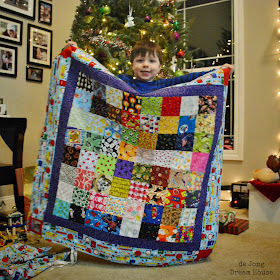 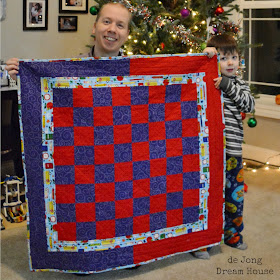