If you've been following this blog since the beginning back in May of 2011, you might remember that this blog started as a way to record the building of our new home, which we called the de Jong Dream House. Over the years, the blog has turned into more of a quilting blog as Jen has taken over and we were done building the house and were thoroughly enjoying living in the house.

But as the great theologian John Lennon once said, "Life is what happens when you make other plans." For as much as we thought we considered everything when building our home, we could not have known that our son would be so passionate about NASA and have some social-emotional challenges to go along with his giftedness. So, as much as we love our dream house, we love our son more. Time for a new dream.

It took 16 months of looking at a lot of houses, but as of June 15, 2019, we are officially moved into the new de Jong Lake House. It is utter chaos here at the moment, but we are all under one roof. And by "all," we are now including my Mom and her Havanese, Mury, who have left sunny Arizona for Ohio with all its willy nilly seasons.

We quickly learned that it is much easier to design and build a new house than it is to re-imagine a current house, but we are up for the challenge. There is a long list of items on our to-do list, but it will take a few years to get them done. Our immediate focus is to replace the kitchen, create a family foyer, replace the floor in the new sewing studio, create a circular driveway, and address the landscaping neglect.

But first, let me give you a tour of the house as we first saw it. 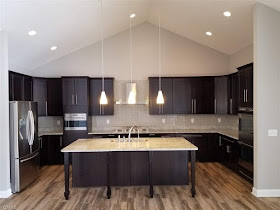 We like the size and symmetry of it. We like that the kitchen, dining area, and great room are one big open space, very similar to a plan we had sketched up when we were considering building again.

What we didn't like is that the kitchen cabinetry was very basic. There were very few drawers and the ones that were there were shaky. 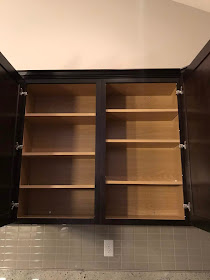 We were so spoiled by our custom kitchen in the dream house, it was disappointing to see this quality in a more expensive house. We knew we could live with it, but we also knew that making a more functional kitchen would increase the house's value and help us feel more like it was "our" home. 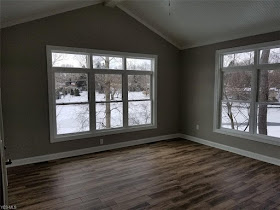 One of our priorities in moving, in addition to being closer to D's new school and Niels' work, was to give Mom more space. In the Dream House, she had a bedroom, en suite, walk in closet, and a slider to the back porch. We wanted to find her a living space as well. In the Lake House, we say that she has the prettiest view in the house. 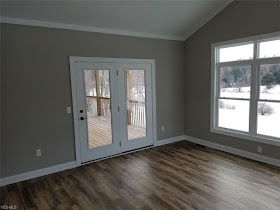 Her living room has large windows on two sides, and a French door leading to the back porch. It has a beautiful few of the lake and all the creatures and critters that hop or fly around the yard. 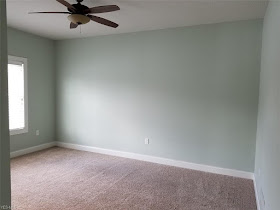 Her bedroom is almost the exact same color as her room in the Dream House which made it really easy for her to move in. 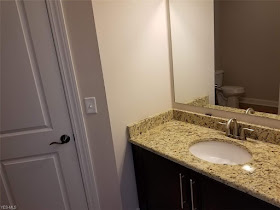 Unfortunately, Mom's new bathroom isn't designed to be accessible like her old bathroom, but it's on the list for our second wave of renovations. In the meantime, she'll live with it for awhile and think about how to design the layout better. 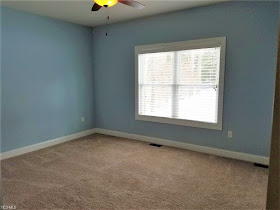 It was also a priority to us to have a guest room to continue hosting friends, family, and anyone else that needs a place to stay. The guest room is on the same side of the house as mom's suite and has a full bathroom just outside the door. We haven't even fully moved in and we've already hosted five soccer coaches from England and Ireland! We look forward to hosting more new friends in the future. 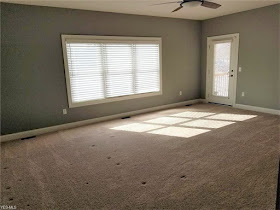 There is a funky little corner between the bedroom and bathroom. The house wasn't furnished when we saw it, so we have no idea what they used it for. Any suggestions? 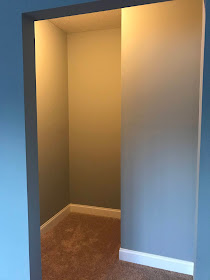 From what we can tell, the theme for the couple that built this house was "big." All of the rooms in the house are bigger than we would have chosen, but the we couldn't resist the overall layout. 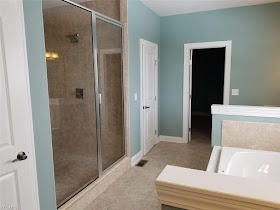 The master bath continues the oversized theme with a massive shower and tub and twin vanities surround the tub. 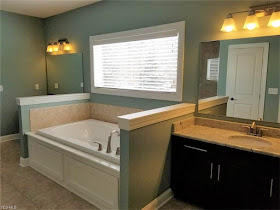 There are two huge closets off either side of the bathroom. Since we don't have nearly enough clothes to fill two closets, we are turning one of them into an office for Niels. 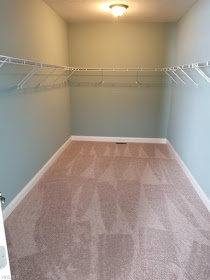 The other closet is off the laundry room--brilliant! It only has wire shelving, but that too will be part of our phase two renovation. 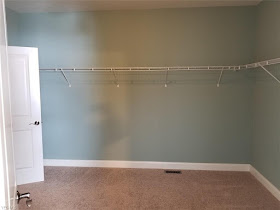 Entering the house from the garage led to claustrophobic cluster of rooms and niches. To the left is the laundry room. 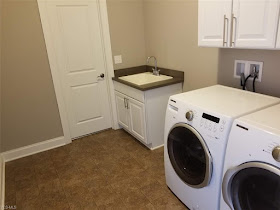 To the right of the laundry room was a little niche for hanging up coats and a wire shelf pantry. 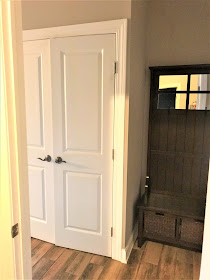 On the other side of the pantry closet was a pocket office. 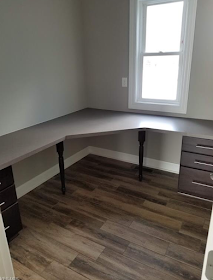 As part of the renovation, we took out all the walls from the office, pantry, and laundry room to make one big family foyer. We're still in the middle of the renos so finished photos will have to wait.

One of our favorite parts of the new house is the back porch. We have already spent more time on this back porch then we ever did on the old back porch. We love looking out at our little lake. We have had some spectacular sunsets. 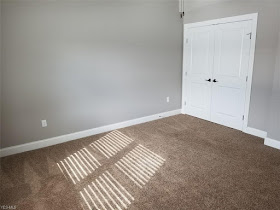 Originally, we thought D would want the bedroom by Mom's suite, but he surprised us by asking to be downstairs.

He didn't get the en-suite he was hoping for, but he does have his own little living area outside his room. We can already imagine him hanging out with his friends down there when he's a teenager.

I think real reason he chose downstairs is because his room is close to the home theater. What a great unexpected surprise that room turned out to be!

We were really happy to learn that the screen, sofas, and audio equipment were included in the sale. I can finally see the subtitles when we watch TV! 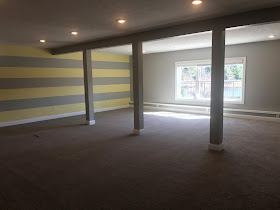 The biggest surprise of the house which is not--as some have teased me--the reason we bought it, is my new sewing studio. It is a ridiculous 28' by 29'. I was hoping for enough room for a long arm. I have it in spades! Welcome to the new Vesper View Studio!

Our renovations are well under way. If you follow me on Instagram, you'll get some sneak peaks of our progress. I look forward to having everything done, getting settled, and getting back to quilting!