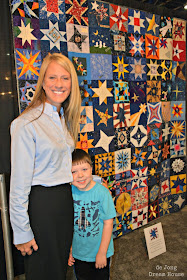 Several months ago, I wrote about a block I made for the the Astronical Quilt Block Challenge. It was really fun to combine my love of quilting with my son's love of space. 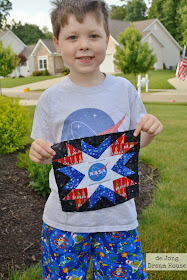 When we made plans to take our son on a tour of NASA facilities this year, my only request was that we timed it to be in Houston for the International Quilt Festival, the world's largest quilting event. It was on my bucket to go someday, but with the NASA quilt blocks on display, I really wanted to go this year!

I also figured that it would be easier to get the boys to spend the day with me when they had things like this NASA display. 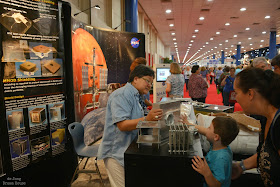 Our first pleasant surprise happened when we learned that astronaut Karen Nyberg, who came up with the idea of the challenge, was going to be attending the festival the same day as us! We had a few hours before Karen's talk, but we couldn't help but start with the block exhibit. About a month before the deadline, I read an article stating that over 600 blocks had been submitted. Imagine our surprise when we learned that over 2,200 came in! Rather than seeing one big quilt, as we expected, a team of quilters put together 28 panels of blocks! There were also five albums of blocks that were either late or the wrong size, but still on display. 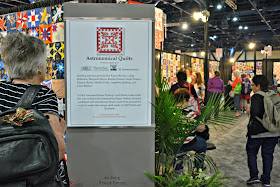 I was wondering how long it was going to take to find my block, when my eagle-eyed hubby alerted me to surprise #2: my block was on the same panel as Karen's! 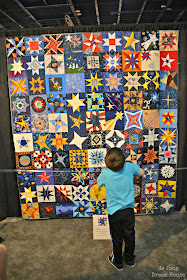 Karen's block--the one she made while she was on the ISS--is the red, white and blue one on the bottom. 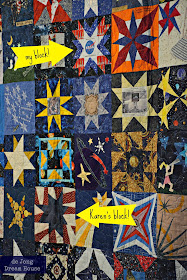 What is especially fun about the placement of my block is that it is easy to spot on all the different photo ops with Karen, like this one:

Then came surprise #3. As we were admiring our panel, a woman nudged me and quietly said, "You know, Karen is here." To which I replied, "Yes, I know! My 5-year-old son loves NASA and we are so happy that we were able to come on the same day she is speaking." The woman smiled at me and said, "No, I mean she's here right now, over there." I looked over there and saw Karen standing with another person from NASA. I pointed her out to my son, and he immediately ran over to her saying, "Miss Nyberg! Miss Nyberg! Excuse me! Miss Nyberg!"

She looked over and smiled at our son. He introduced himself and asked if he could show her our block. When she said yes, he took her hand and they walked over to our panel. 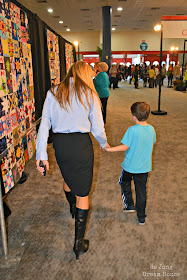 After chatting about his dreams of being a rocket scientist, others noticed Karen and we moved on to admire the other blocks.

One block I was happy to find was that of my new blogger friend, Sarah from saroy.net.Saroy.net. 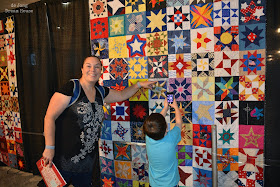 I wish I had thought to take full photos of all the panels, but fortunately, Cindy Campbell did. I took a ton of pictures of my favorite blocks, which can be seen, along with other photos from the show, on my Facebook page.

Edited 10/18/18.
I was looking for a pattern and was led to a blog by Valerija Mezhybovska, who shared this picture of Karen, surrounded by some of the star blocks. Valerija's block is in the top left corner. Mine is directly under hers! So cool! 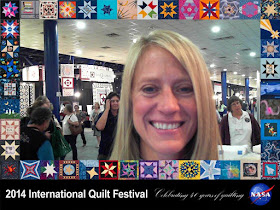