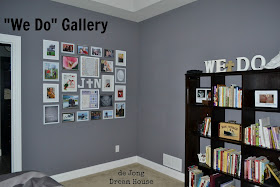 Now that the holidays are over, I'm finally taking the time to post about some of our latest projects. Today I'm going to write about another gallery. Yes, I may have a slight addiction to photo galleries.

When Niels and I got married five years ago, we had white wood letters spelling out "We Do" on our cake table. 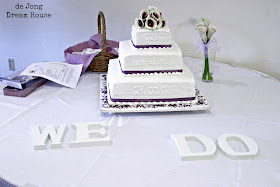 Since our honeymoon, we've used those letters as decor in our master bedroom. We liked "we do" better than "I do" because of course, we both chose to get married. When our son started noticing our wedding bands, he called them our "we do" rings. I knew that I wanted to make a "we do" wall, but it took a little time--made longer by lots of sentimental trips down memory lane--to decide on the photos.

A bit about our story. Niels and I met online in September 2006. He was sure pretty quickly that he wanted to marry. I was a little gun shy. I spent Christmas of 2006 in China visiting some of my best friends, who had just moved there a few months early. Niels spent that Christmas in the Netherlands with his family. The day after I arrived in China, a tsunami knocked out all the underwater network lines, which meant I couldn't access my email from home. However, I couldn't connect with the Netherlands. So Niels called my family to tell them I had arrived safely...and introduced himself as my boyfriend. I had also planned to pay my bills online, but since the internet was out for almost the full three weeks I was in China, I took the leap to trust Niels with my bank password so he could pay my bills. Over that time, not being able to communicate well or often, I realized how much I missed him. Talking to my friends, they helped me realize that Niels was exactly the kind of man I had been praying to find. On the first night I returned home, Niels came over and we talked long into the night about how we wanted to spend the rest of our lives together. In March of 2007, we flew to the Netherlands, where my dad had a short layover on his way to Israel with my sisters and brother-in-law. I met Niels' family, and Niels was able to ask for my dad's blessing. A few days later, we went to Paris, and Niels proposed at the foot of the Eiffel Tower. Clearly travel was a big part of our courtship!

So, the challenge was to figure out how to put all those memories on our wall! I started by playing around with a layout, and then listed favorite memories of our life together. 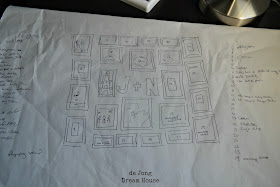 I bought a variety of frames and shadow boxes with white and silver frames. Then I found photos and mementos that worked. 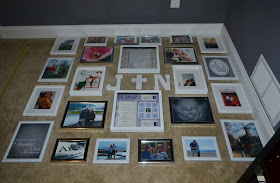 Once again, we used command strips to attach the frames to the wall. They are so easy to use. 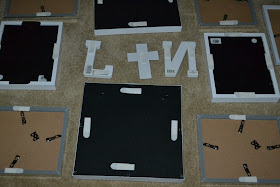 It was a little confusing when all the frames were flipped, so I was glad to have my cheat sheet! 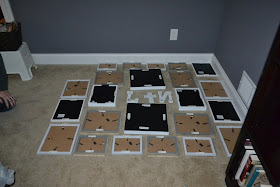 We used our level for spacing to make it easier on ourselves. 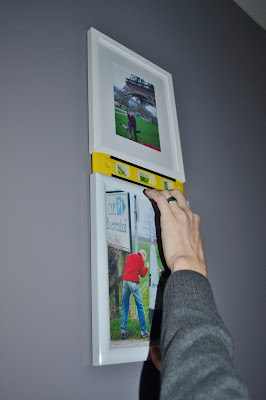 Niels liked the first row of photos so much, we were tempted to stop there. 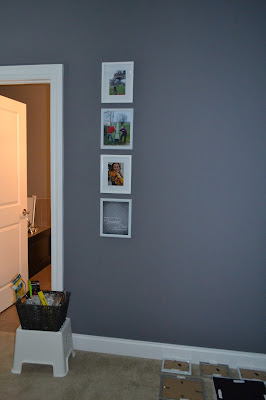 Then we lined up the four 5x7's along the top. 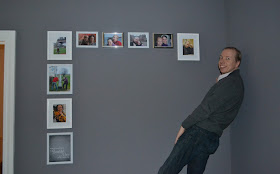 From there, we started working down. 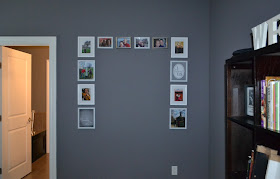 And then we completed the outer square. 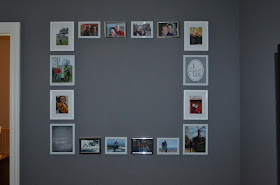 Finally, we filled in the middle. 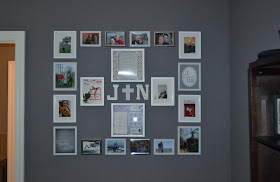 I'm so happy to have all these fun moments to look at when I wake up each day. 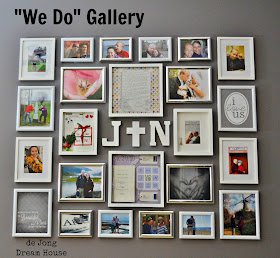 Here's a tour of some of the photos. 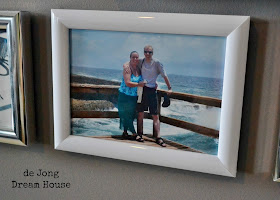 This is the latest in our collection of photo galleries. Click on the links below to check out the rest:
Anniversary Gallery
Growing Up Gallery
Great Room Great Moments Gallery
Little Great Room Gallery
Visual Guest Book