It's been pretty quiet here lately at the de Jong Dream House as we have been enjoying our first holiday season in our new home. As the old year passes and the new year began, we took some time to look over our most popular posts over the last year. What we realized is that our most-viewed posts firmly fell into one of two camps: those detailing our dream house build and those that highlighted projects completed once we moved in. It makes sense, really, because once the new house was complete, our focus when from building a house to creating a home.

Keeping this in mind, we decided that we would list both the top 12 "house" posts and the top 12 "home" posts, plus 12 of our favorite posts.

For 2013, we will be posting an updated home tour, individual room tours, an updated utility post (you won't believe this one!), and lots more project and organizational posts. As the one year anniversary of our move approaches, expect to see a few posts about the things we still love and what we might have changed if we were do it again.

And now, the year in review: 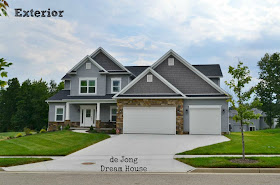 12. Aging in Place (January 4, 2012)
Seven considerations for making your house a forever home.

11. Quartz and Marble, Happy and Sad (February 4, 2012)
Installation of our kitchen countertops and a happy ending to our installer's mistake.

10. Pantry on Pinterest (February 15, 2012)
We had a lot of love for our old pantry on Pintrest this year, so I posted more details for those wanting to organize their own.

8. Last Full Day of Work on the House (February 16, 2012)
A lot of our guests came from GardenWeb and were following along with our build as they prepared for theirs. I think that's why this post of final odds and ends has been popular.

7. It's Beginning to Look a Lot Like Home (January 15, 2012)
Once the paint goes on the walls, the place looks less like a construction site and more like a place you'd want to live. According to our analytics, lots of people found this site as they were making their own paint selections.

6.Lighting, LVT, and Loving Our Tile (January 27,2012)
Over all, any time we posted about our selections, our visitors increased.

5.Another Day Closer (February 9, 2012)
Another post with lots of update photos, but it was our back splash that made it popular.

4. Last Minute Lighting (February 9, 2012)
We knew we wanted our backsplash outlets to be hidden. We didn't know that it wasn't as easier as we thought it would. In the end, we found a great vendor with over-the-top excellent service.

3.Prepping For Counters and Sinks (January 5, 2012)
Radius, reveal, profile, oh my! A guide to all the terms and choices one has to make when putting in counters and sinks.

2. Our Cork Floors (January 25, 2012)
In real life, the feature of our house that gets the most comment is our cork floors. Most people have never seen them in real life, and they are nothing like what they imagine. For many of our cyber friends, this post is their first look--and an education on the benefits of--cork floors. 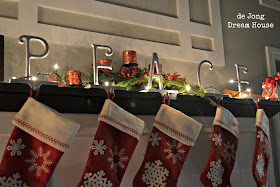 a little history of my journey towards becoming a tree hugger.

Practically Green writes, "Taking off your shoes before you enter your home is the public health equivalent of washing your hands." This is our response.

When our son was diagnosed with an allergic to dairy, I went on a mission to figure out how he could still have his favorite dessert.

Near the top of my wish list for the new house was a walk-in pantry. We are still saving for the custom shelving, but in the meantime, this is how we make it work.

Here's a tour of my "office," a command center along one wall of the kitchen where I pay bills, plan menus, and keep track of all the household papers.

I knew I didn't want a traditional pantry door. This tutorial shows how I used vinyl to customize the door for our Dutch family.

A tour of our newly-moved-in kitchen.

An early tour of our home two months after we moved in.

The most popular post by a landslide was this tutorial for our missing sock holder. Thank you, Pinterest!

Special Bonus: Top 12 "Project" Posts:
The following posts are newer, so they haven't had as much time to be discovered, but they are a nice introduction to the kind of posts you'll find here in the coming year.