Well friends, it's been a rough six months or so with my broken brain. The good news is my new meds seems to be helping a lot after the snafu with the original change. Yikes, that was bad! Leave it to me to be the .02% to have a have a horrible reaction to the miracle med everyone else loves. C'est la vie. I'm still struggling with some cognitive things...like getting my words out in a blog. I had planned to write a post for Brain Injury Awareness month last month, but it just didn't happen, and 12 years after sustaining my Traumatic Brain Injury, I still struggle to give myself grace when I'm not able to do what I want to do.

On the plus side, the change in meds means I'm sewing again! I just finished my 61st quilt, which I call Timur's Russian Heart. 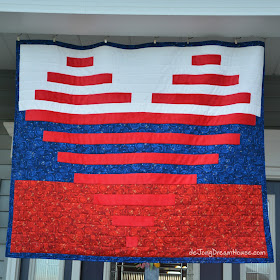 Followers of this blog might recall that last summer our family attended Russian Camp at Concordia Villiage's Lesnoe Ozero. (I highly recommend the camp if your family or children have an interest in learning a new language!!) I spent some quality time with the nurse on staff, and we have since become friends on Facebook. Recently, she posted about a six-year-old boy who had recently moved to Minnesota from Russian. In the midst of adjusting to such a big move, he soon found himself in need of a heart transplant. As the mom of a 7-year-old, my heart broke for this sweet kiddo who had to deal with such a major operation in a strange country where he didn't yet know the language or have the chance to make friends. I knew he needed a quilt.

Even before I finished reading his GoFund page, I need what quilt pattern I would use: Jera Brandvig's Summer Love. The second quilt I ever made--three years ago!--was this striped heart quilt that I made for our Dutch daughter Marissa. 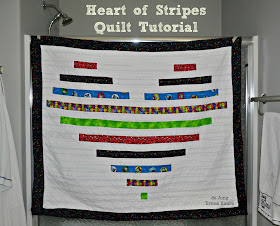 I have learned SO much about quilting since then!!! Design-wise, I was also inspired by my 20th quilt, a cross-cultural baby quilt I made for a little one whose mama is American and daddy is Columbian. 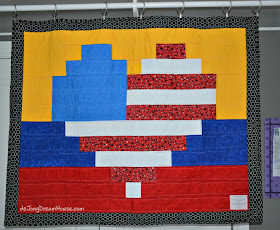 Our connection to Russia, other than attending Russian camp, is that our son loves all things space. He chose to study Russian over the 14 other languages offered at Concordia because of his love for space history and Russia's place in it. Even now, in the post-space shuttle era, NASA relies on the Russian space agency to send our astronauts to the ISS on the Russian Soyuz capsule.

So, I knew I wanted to use fabric that reflects the cooperation between Russian and America. I immediately thought of the Star fabric from Joann.

The white fabric was taken from my stash. It was also from Joann and had what looked to me like fireworks embossed on it. The red for the heart is minky, because my 7-year-old insists that all little boys need minky on their quilts, especially if they will be spending a lot of time in bed. The back is solid red minky.

For quilting, I stitched in the ditch to emphasize the Russian flag. This was the fourth quilt with my new way of binding. It's still my weakest part of the quilting process but already seeing a ton of improvement.

Finally, I had fun designing the label. I did need a little help with the Russian translation, because despite a week of Russian immersion camp, I am nowhere near fluent!! 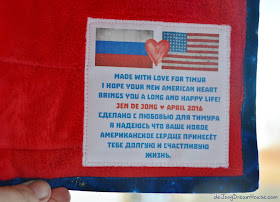 Last week, I sent up some prayers and shipped the quilt to Minnesota to its new home. My son's class wanted to be part of the fun, so they made a huge stack of get well cards and welcome to American messages. Through my friend, I was able to receive a note of thanks, along with a few photos. I didn't ask permission to post the photo of Timur wrapped up with his quilt and a huge smile on his face, but believe me, it's pretty adorable and makes the time and effort of quilting totally worth it! I can share this picture of the opened care package. I wish I could have been a fly on the wall! 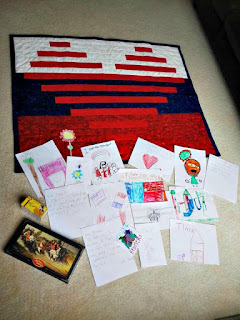 I cannot adequately put into words how good it is for my soul to be able to do this. After my brain injury, I spent a good two years pretty much failing at everything as I tried to return to my old life and work. It is crushing to one's self esteem to wonder if there will ever be something successful about one's life. Even after 61 quilts, I still don't tell anyone that I'm making a quilt before it's done because it conjures up all those feelings of letting my colleagues and clients down. I don't quilt because I need to be thanked or because I expect it to be used in any particular way. It is a gift of my heart to someone else, to show that I care, that I've thought of them enough to come up with a design that I think will be personal to them, bought fabric, and spent many hours putting the quilt together. Once the gift is given, I have done my part, what I am called to do. Some quilts I make for charity and never find out where they end up. Sometimes I made a quilt for an occasion and only receive a polite thank you. But sometimes, when I see that my gift is meaningful to the recipient, my heart is filled to overflowing.